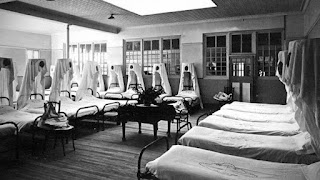 I heard her all night, in the bunk bed above mine, flailing at her mattress, yanking out fistfuls of chaff and straw. Now she’s quiet, her breath easier.

Later that morning, she waves to me as I take the path to the falls. She sits beneath a beech tree—my tree, the one assigned me—and grins defiantly. It is leafless and spindly—nothing special.

She doesn’t use the nearby bench, but curls atop the exposed roots, as, doubtless, she’ll curl atop her broken bunk bed later tonight.

I’m allowed to walk farther than the other inmates. I nod at a nurse who’s wheeled her invalid patient—among the few patients left in the Institute’s care—to the edge of the grounds. Beyond the chain-link fence, the well-groomed lawn gives way to furrowed earth and an idling tractor.

The gravel path leads to a dirt trail. It rained last night, and the hem of my nightgown trails in the mud. I shiver, feel naked in the cool morning breeze. The trail twists above a stream that soon plunges toward rapids. I reach a flat outcrop, the falls behind me now, the ground slick with mud and ice. I stare at the lake below, which is fringed with bogs and marsh before it widens and deepens, turns indigo. A few sailboats venture out, though most shelter in the far shore’s rocky coves and bays.

When I return, I find the girl where I last saw her, now standing on the bench and stretching an arm toward the tree’s upper branches. I wonder what she sees there. I glimpse her breasts and patch of pubic hair beneath a flimsy nightgown. Bruises dapple her too-thin rib cage and limbs, and her eyes gleam dark and hollow. She resembles a manikin of straw and smoke.

“I’ve had to undo so many of my predecessor’s so-called reforms,” the director says, pacing his office. The windows are open, and dust and noise fill the room. Barracks and huts are under construction, though the old sanitarium, a blackened hulk since last summer’s conflagration, looms in the distance.

“Doubtless he meant well,” the director says, “though many thought his policies dangerous. I prefer to think them unwise.” He pauses, looks out the window. One building is for him and his family. “That he was a widower, and living alone, should have disqualified him. It’s isolating here, and one needs counsel, and, dare I say, a loving influence, to help inform one’s decisions, which is why we prefer new staff to bring families, especially if there are young children.”

But he’s more like the former director than he admits. They’re the same age or would be, if his predecessor were still alive. On his desk is a portrait of his much younger wife, posing in a wedding gown with two children, also dressed up, the girl about fifteen, the boy seven. The boy clutches a bridal bouquet to his breast. It’s a formal picture, taken by a professional photographer, but where is the director—the groom?

He stares at me, staring at the portrait. “My stepchildren are the same age as the children you once taught.” I don’t remind him I merely played a teacher on TV, despite the stories and rumors my publicists spread in the newspapers and fanzines. “They’re arriving soon, and I want you to tutor them. Your duties are light, and you can use the extra work. You can also teach the staff’s children when they arrive.”

I’m alone in the dormitory now, but wonder what happened to the girl. The next day I see the same nurse, again wheeling her patient to the chain-link fence.

The girl’s on her mind too.

“They let her go anywhere,” the nurse says, between drags of her cigarette. The smoke eddies in the still, dusty air. Nearby, the tractor roars into life and rumbles in our direction. “She steals trays of food left outside doors and at night lays her head anywhere.”

The nurse shrugs. “Why should she try? The girl has more freedom inside the grounds than outside. Or,” she adds, “the director hopes she’ll have an accident.” She nods toward a small, overgrown trail that runs beside the chain-link fence before angling toward the creek and falls. “But I wouldn’t wander far—not that you would.” She smiles slyly.

I say goodbye and leave. When they’re out of sight, I cross to the trail she pointed to. It’s narrow and difficult to follow, as if trammeled by small creatures and used only by them. Soon I stray into nettles and thorns. The fence remains nearby, but in disrepair, the wires snapped and twisted like bent or broken fingers. A recent hole’s been dug too, fresh earth scattered as if in a frenzy.

I hesitate, then draw no nearer. The nurse may be wrong about the girl. But not about me.

When next the director summons me, I’m warned an influx of guests and visitors will arrive over the next few days.

“My predecessor had little inkling of the changes to come,” he says. “Doubtless, he believed the Institut’s doors would close after last summer’s fires.” The director raises his voice over the roar of bulldozers and backhoes. Grit and dust swirl through the open window. “You and he were close. He must have been fond of you, considering the privileges granted you, which, I might add, I never rescinded.”

He pauses, lets the words sink in. From behind the desk, he leans forward. He’s changed the office’s layout and furniture so that it’s more like his predecessor’s, the couch and ottoman, the Russian icons and African masks rescued from the flames.

But the former director, before his swift, ignoble decline, had been a renowned psychoanalyst, and while his replacement possesses an MD and Ph.D., he’s shown little interest in resuming my therapeutic sessions. Even now, his concerns seem more interrogative than analytical.

On his desk lies my folder, yellowed and dog-eared, but thick with notes. I recognize the former director’s handwriting.

“What did you two discuss,” he asks, “other than your TV and theatrical career?”

Then my more personal information has been expunged, as promised.

“Not much,” I tell him, hoping he’d believe me.

“So your love affairs then, and hobnobbing with the rich and famous?” He drums his pencil against the folder and then opens it, seemingly at random.

“Celebrity gossip never interested him. He didn’t even watch my TV show. But whenever he visited the city, he’d attend one of my plays.”

“You mean those produced after your show’s cancellation. I also saw a play of yours. I found it dull, worse, incomprehensible. Actually, it made me angry. What were you trying to prove, staging such rubbish?”

His face reddens. He pushes aside the folder and rises from his chair. “You must have been desperate for work, which explains your misjudgment—”

He continues in that vein. Eventually, he dismisses me, saying nothing about the expected guests and my role in their visit.

I no longer stay in the dormitory, unable to abide any more the emptiness and quiet. Instead, I move to a shack closer to the chain-link fence. The nurse still wheels her patient to the same spot every sunrise, and the tractor revs into life a few minutes later. The noise and company comfort me.

I haven’t told the director, who doubtless knows of my move and hasn’t objected. Neither has he again summoned me to his office.

I ponder when the visitors will arrive and what that portends.

My immediate effects are meager, a footlocker’s worth—a few toiletries, worn clothes, old books and magazines I salvaged from the fire. Journal and diary. My other possessions, which I brought with me to the Institute and Sanitarium, remain in storage. They’re mostly keepsakes and mementos: my father’s army discharge papers, my mother’s wedding and engagement rings, also my birth certificate, passport, and university diploma.

My fan letters, theater notices, trophies, awards, my scrapbooks, souvenirs, and so forth, are gone, though the director assured me they survived the fire, but won’t grant me access to them. He insists they’re not lost, merely misplaced.

“Do you know,” he said, “how many patients we’ve had over the years? And so many possessions still in storage, even of patients who’ve long died. No one wants their effects, not the heirs, not the state—”

I dismantle the bunk bed and drag the bottom half to the shed. I scavenge the Sanitarium’s ruins for curtains, linen, rugs, a table and chair. Dishes and cutlery. Potbelly stove. A transistor radio, its batteries not quite dead . . . .