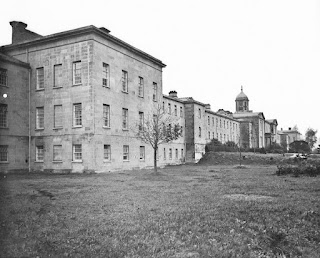 Early one morning, a wood-paneled station wagon, mud splattered, labors up the hill and pulls beside the director’s office. A man and woman get out. The driver remains behind the wheel, engine idling, headlights cutting through the gloom.

I watch from my garden patch. I set down my trowel and garden fork and walk toward them, keeping out of sight (the director, I know, is gone and won’t return until tomorrow).

The man and woman wear parkas, gloves, and boots, their faces indistinct in the rain. They open the back of the station wagon and begin unloading file cartons, computer equipment, office supplies. The driver cuts the engine and headlights. He gets out and joins them, his uniform military or paramilitary, more a bodyguard’s than a chauffeur’s.

A tarp covers the bulkiest item. The driver, reluctantly, climbs inside the vehicle, though he’s far larger than the other two. He grunts and shoves and kicks his legs until the item juts out the tailgate. It appears multi-limbed, the arms retracted, inflexible, like a giant robotic spider. The three then maneuver it onto a small handcart, where it sways, nearly toppling over.

They pause, breathless. The woman then goes to unlock the office door and props it open.

She turns, catching my eye, and I duck, but too late. The woman stares a while longer, then rejoins her companions.

I also spied on the director earlier, leaving in his Land Rover in the dead of night. He’d been acting strangely—furtively—ever since receiving a letter from his wife saying she and the children were impatient and coming to the Institute forthwith.

I broke into his office soon after he left, found his wife’s letter and several others, drafts of a missive he meant to send in reply. There were also recent correspondences from the Department of Detention and Psychiatric Services, most sent by the woman, I presume, I’ve been observing. The letters grew more exhortative and critical, demanding the director cease forthwith all plans of reorganization and expansion. These, too, he’d written notes and drafts in response, though I doubt he sent these either. They were too inflammatory, and the director, however incautious, is neither self-destructive nor delusional.

I think he intends to return presently. Otherwise, why leave the office in such culpatory disorder? He’s fortunate I know him better than he knows himself, and removed the offending matter to a safer place.