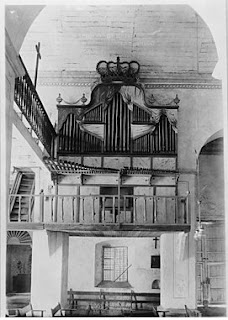 Once a week, a priest visits us. He holds service in the Institute’s chapel, which, incredibly, survived the conflagration. He’s a young priest, educated and cosmopolitan, who makes a weekly circuit of the Institute and nearby villages and hamlets, saving Sunday liturgy for the diocese’s largest town and church.

Usually he comes Tuesdays, but lately other days too. Attendance might improve if we knew the priest’s schedule, though he does announce himself somewhat beforehand, arriving by motorbike, whose loud, staccato engine pierces the air for several miles.

He’d cut the engine and dismount at the Institute’s gates. Pushing the motorbike up the steep, muddy hill, his sighs and wheezings—the panniers overstuffed with priestly appurtenances—a secondary announcement, like a clock’s snooze alarm activating.

I greet the priest on the road, then follow him to the chapel, where he washes at the trough and changes into his vestments. I help set up the altar table, crucifix, and candlesticks, which I retrieve from the panniers.

Today the nurse and her patient join us. Sometimes laborers attended, but it’s past quitting time and they’ve gone home (the director attends only when there are guests or visitors).

After mass, I stay for confession. The priest knows I’m not Catholic, but he humors me.

We walk down the ruined nave toward the chancel and altar. The blackened columns and ceiling still reek of fire, but the confessional remains intact.

He has two more villages to visit tonight, but has agreed to hear my confession—and why not, aren’t I, despite my disaffection, his most loyal congregant at the Institute, never missing a mass?

In the confessional, I admit to the usual—nocturnal emissions, however involuntary, and complicated by the girl in the bunk bed beneath me. They never stopped occurring, I add, since her disappearance, but have even increased in frequency.

“Anything else?” he sighs.

I tell him no. He prescribes no penance, instead obliges with a terse, mumbled absolution.

Then, both of us rising, he says, “And now I have a favor to ask you.”

Again I follow the priest. (Have I mentioned he has a wrestler or weight-lifter’s physique, even in vestments?) And I’m relieved he isn’t angry, or eager to leave. I look forward to his visits, sensing a kindred soul, despite our religious differences.

He leads me deeper into the ravaged basilica, the domed ceiling and stained-glass windows shattered, the high altar and crucifix charred and blistered.

We climb to the balcony where the steam organ is, its pipes bent, scarred, tarnished. He sits at the three-tiered keyboard, hands poised above the keys, feet lightly pumping the pedals.

He pauses, toggles a switch, and the console lights up. A kind of music bursts forth, however jarring and tenuous. He frowns, again pauses, and then again his fingers ripple across the keys. The results the same, he turns to me beseechingly.

“Weren’t you once an audio engineer?”

I was an electrician and stagehand before I became an actor.

“Your skills, doubtless, are rusty—aha! Here’s the manual.”

He’d been sitting on it inadvertently. I take it and leave. The priest, still at the organ, flogs the keys with even greater energy, the notes raucous, loud, sour.

I review the manual desultorily, shivering, my blankets thin, threadbare.

And don’t I deserve a better domicile than a shed or dormitory? If I’m to tutor the director’s children. If I’m to help the priest with his steam organ. (The main issue, I believe, isn’t the motor, keyboards, or pedals, but the pipes, corroded and misaligned. Probably, the entire organ needs dismantling and cleaning—tedious and time-consuming work.)

I’ve had little to do for months, years even. I’m not sure I’m prepared for the coming upheavals.